According to expert agencies and the studies conducted so far, there’s nothing to suggest 5G millimeter wave is a significant health risk. But most experts say more quality research is needed.

“Everybody, including me, seems to be calling for more research on possible bioeffects of 5G,” Foster said. “But what we don’t need is more fishing expeditions and cherry-picking of the literature. We need more systematic reviews of the existing research and more well-done studies focusing on health-related endpoints.”

Russell Nichols has the details in the June issue of Comstock’s magazine.

In December, Earl Lum spent the holiday season snooping around Sacramento’s eight city council districts, snapping pictures of city-owned street lights for evidence. The wireless analyst was on a mission to assess the status of Verizon’s 5G Home network, which launched in the capital in October 2018.

He came bearing questions: How many poles had the shoe-boxed sized 5G radios mounted on them? Were these fixed wireless sites only in wealthier neighborhoods? Did they target businesses? It took him three trips to map every pole. Each time, he scouted for two to three days from dawn to dusk. For an official launch of a network like this, Lum believes at least 2,000 sites with about 50 percent service coverage would be respectable. But what he found was some 200 small cells attached to street lights with broadband signals reaching less than 10 percent of Sacramento’s population.

“The network was extremely limited,” says Lum, founder of EJL Wireless Research in Half Moon Bay, who has analyzed wireless and mobile radio access markets for over 20 years. “There was clearly not enough sites to even do what I would call a real launch for a network.”

There are 40,000 city-owned poles in Sacramento with about 9,000 being suitable for wireless development, according to city officials. But Lum argues that those suitable poles only cover the main streets, and the distance of the signals from each site fails to fill the gaps. Another issue he points out is the millimeter wave technology, which is line of sight, meaning trees and rain can disrupt signals.

Two years after the city’s partnership with Verizon was announced, Lum’s findings – published in the report United States 5G Fixed Wireless Access Case Study, Verizon Wireless and the City of Sacramento, CA – paint a sobering picture. The city boasted of being one of the first four test cities for the telecom giant’s 5G network. Officials called the move a major step toward a future of lightning-fast speeds, smart meters and wearable technology, and, down the line, industrial automation and self-driving cars. They called it a “game-changer.” But if the game has any hope of changing, Lum says the city would need as many as 4,000 sites to provide full coverage, an undertaking that could take up to 10 years.

“Everyone did a lot of field trials prior to the launch,” Lum says. “[Verizon wasn’t] going into this whole thing blind. Part of this survey was to do a fact check on the reality.”

Russell Nicholes captures the struggle that Sacramento is going through to implement 5G.  Think about the struggle that your community would go through to implement mmWave 5G with the need to maintain the line of sight connections and the antenna spacing needed to provide full coverage. Does your community have unique street lighting infrastructure that would inhibit the use of standard mini-cell tower installations, such as these in historic downtown Nevada City?

Here is a Chicago Mini-Cell Tower

“Deployment of 5G services using microwave and millimeter wave frequency bands is critical to the success of 5G in the United States. However, the limitations we have uncovered using these frequency bands should cause the industry to take a serious look at the return on investment for these types of 5G networks.”

Light Reading has a 5G article that covers why this is important to potential rural customers. All the hype and concern about health issues has been about mmWave installation. Rural customers need to focus on the low band implementation of 5G, which both AT&T and T-Mobile have a role to play.

Light Reading: Why this matters

5G remains a hot topic in the wireless industry, but so far most 5G deployments have been done using millimeter-wave (mmWave) spectrum. Such spectrum generally sits above 20GHz and is able to transmit huge amounts of data but cannot travel more than a few thousand feet. Thus, today’s 5G mmWave networks from the likes of Verizon and AT&T only cover a handful of city blocks in a handful of large cities.

However, due to the physical propagation characteristics of low-band spectrum like 600MHz or 700MHz, operators like T-Mobile or AT&T could easily cover whole cities with just one cell tower. Thus, low-band spectrum will play a critical role in pushing 5G into more and more parts of the US.

The tradeoff though is that low-band spectrum can’t transmit as much data as mmWave spectrum. For example, Verizon’s mmWave 5G network has been averaging around 500Mbit/s with peaks above 1Gbit/s, while T-Mobile’s CTO has acknowledged that 5G on the operator’s 600MHz spectrum likely will clock in around 60-70Mbit/s. AT&T will probably see similar speeds on its 700MHz 5G network.

Well, 60-70 Mbits is better than no bits at all. Stay Tuned 5G is coming, the question is will SpaceX Statlink get there before rural 5G?  If they both arrive in your neighborhood, will competition drive down the price? Yes!  Capitalism is wonderful!

The cellphones known as 5G, or fifth generation, represent the vanguard of a wireless era rich in interconnected cars, factories and cities. Whichever nation dominates the new technology will gain a competitive edge for much of this century, according to many analysts. But a television network a few blocks from the White House has been stirring concerns about a hidden flaw.

“Just a small one,” a TV reporter told her viewers recently. “It might kill you.”

Yet even as RT America, the cat’s paw of Russia’s president, Vladimir Putin, has been doing its best to stoke the fears of American viewers, Mr. Putin, on Feb. 20, ordered the launch of Russian 5G networks in a tone evoking optimism rather than doom.

“We need to look forward,” he said, according to Tass, the Russian news agency. “The challenge for the upcoming years is to organize universal access to high-speed internet, to start operation of the fifth-generation communication systems.”

The Russian’s are having an impact, as more cities are looking to declare 5G a health hazard. Examples here, here, and here.

Sometimes it is hard to visualize where the 5G spectrum is relative to existing cell phones and TV bands. This chart from the NYT article should help.

AT&T plans to test 5G in combination with the AirGig fixed broadband technology that the carrier developed in house. The 5G AirGig plans came to light in an AT&T policy paper in which the carrier also said it had “initiated discussions with technology suppliers” about testing and building commercial-grade AirGig equipment.

AT&T has been testing its AirGig technology to provide gigabit broadband connectivity for several years. The technology is designed for deployment on powerline infrastructure but is considerably different from the broadband powerline technology that failed to find commercial success a decade or so ago. More details here. 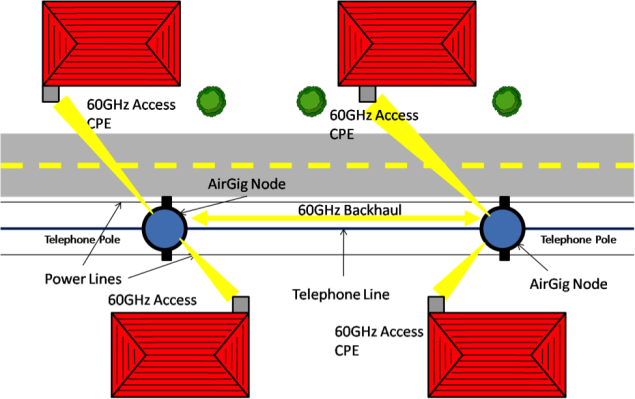 RC Wireless has a detailed description of the technology as it existed in 2017. AirGig solves the need for fiber backhaul networks. It also addresses some other thorny 5G issues by eliminating the need for mini towers by using the existing telephone and power poles. By using existing poles, it will be possible to extend the service into rural areas, going where ever the power/telephone grid exists. Of course, there is a cost and return on investment factor that will be part of any rural extension decision.