For additional information about the project, or to sign up, visit www.calspeed.net

I was a volunteer member of the beta test team for the CalSpeed data collection box. The box arrived in the mall, and I connected it to my internet router with a Gigahertz connection from Wave Broadband.

When Initially installed, before the beta test started,  the Wave 1Gig modem interface device’s speed ranged from 700 to 850 Mbps using my desktop Mac with Speedtest.com Speed checks were take at random times during the day. Good to go for the beta test.

During the beta test, we were on vacation for two weeks in Seattle. While we were gone, PG&E change our electric meter. They cut off the power to the house while making the change. For some reason, the router quit working as did my drip irrigation system. I rebooted the router upon returning home and data collection restarted. After the reboot, I did a speed test on the Mac using SpeedTest.com and Wave’s Speed Test ranged between 300 Mbps and 500 Mbps.  Not the Wave promised 1000 Mbps!

These speeds are consistent with the overall averages collected by the CalSpeed data collection box. As you can see from the recorded data, my average was about 400 Mbps on ethernet and about 160 Mbps on WiFi.

The Wave network modem had built-in WiFi signals, one in the 2.4 GHz band and one in the 5.3 GHz band. It was not clear to me which band the CalSpeed box was monitoring, and I failed to ask.

I returned the beta test box to the development team, but I continue to monitor the Wave broadband signal with my DIY recorder box. Following the beta test, I downgraded my Wave connection to 250 Mbps Service, as my DIY box is limited to about 300 Mbps due to the circuit limitation on the Raspberry Pi processor board.

Given all the marketing hype about broadband internet access speeds, the only valid method of determining the real speeds is field testing. Going out to the specific location and measuring the speed of the bits coming out of the ethernet port. So far, I am not getting what I am paying for, and there is a high probability that most users are not experiencing their ISPs advertised level of service.

Here is an example output: 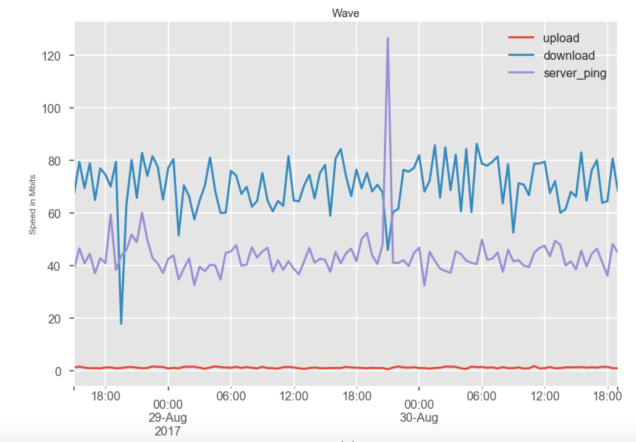 One thought on “Volunteers Being Sought for Home Internet Study”